Fully permitted uranium projects are scarce and becoming increasingly crucial for future clean electricity generation, and TSX-Vlisted GoviEx (GXU) has two of them – and with significant resources.

The projects – Madaouela, in Niger, and Mutanga, in Zambia – have, subject to a favourable uranium market price, the potential to be developed to production in 2024 and 2026, respectively. That scheduling is good news for nuclear utilities and GoviEx shareholders alike.
“In the last month, I’ve probably spoken to 15 different utilities worldwide and our timeframe fits very nicely with them because they’ve been drawing down on their contracts, drawing down on their inventories,” GoviEx CEO, Daniel Major, said.
“This is particularly the case in the US, where, from 2025, a lot of them are uncovered and they need commitments to go beyond that – so the timing works perfectly for us,” he said.
GoviEx spotted the looming supply crunch early on, while the price slump seen through the 2010s saw a lack of interest in uranium projects.
In recent years, uranium inventories have shrunk, and suffered supply shortages, which are expected to further expand with declining secondary supplies – just as GoviEx anticipates to be prepared to cut the ribbon on Madaouela.
To put the supply shortages into context, Australia’s chief economist expects global production in 2024, when GoviEx expects Madaouela to be commissioning, to fall below projected consumption of 85.7 million tonnes or 26%.
“We have a large resource, and the difference between us and most of our peers is that two of our projects are already fully permitted. And therein lies another difference – most of our peers have one project, whereas we have three projects and two of them are well positioned, fully permitted and ready to go,” Major said.
The third project, the CEO of the Canada-based company mentions, is Falea in Mali – a uranium, gold, copper and silver exploration play. Falea has indicated and inferred resources of 63 million lb of copper and 21 million ounces of silver.
Madaouela’s probable mineral reserves are 54.7Mlb U3O8, while Mutanga’s mineral resource is 15.2Mlb U3O8 measured and indicated, and 44.9Mlb U3O8 in the inferred category. The Nigerien project has a forecast steady-state production of 2.48Mlb and the Zambian project is targeted at 2.60Mlb.
Madaouela’s NPV at a long-term uranium price of $55/lb U3O8 is $117 million at an 8% discount rate with an IRR of 13.7%. The recent published update PFS on the project highlighted potential to acquire up to $180m in project debt to fund capital development. 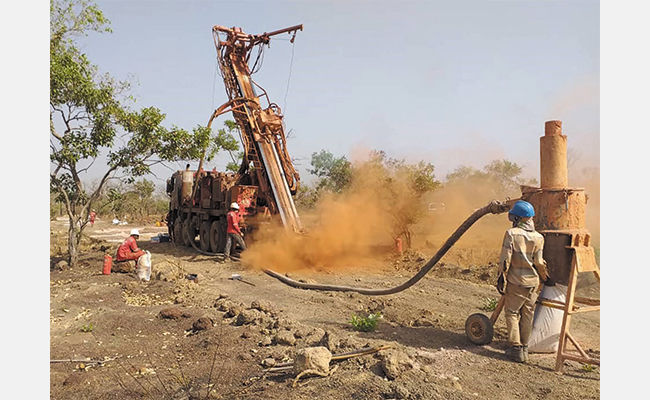 “GoviEx is trading at about 30% of its NPV. A lot of companies out there are already up at their NPV. There’s a lot of upside for a company like GoviEx on our projects still to come through. We haven’t even priced in the market yet.
“The projects also have massive exploration upside. We’ve decided to go for a rate at Madaouela that, we feel, is doable in the initial stages and from a financial perspective, but once we get going, the capacity is there to go much bigger and at a greater speed.
“We’ve already got over 20 years of production in existing resources, so the ability to expand that is very easy – and that’s just on the one licence, let alone the other exploration licences we’ve got around us,” he said.
With supply deficits also come better prices, and given GoviEx’s low capital and operational expenditures for the uranium projects – they look very profitable.
Madaouela – with a mine life of 20 years – has a total life of mine cost, including operational and capital expenditure, of $35.2/lb U3O8. Mutanga’s is $37.9/lb.
Australia’s chief economist tips uranium spot prices in 2024 will average $42.5/lb, $47.7/lb in 2025, and $52.4/lb in 2026.
“The Nigerian Madaouela project is coming up first. We already have our agreement structured with the government.
“We’ve created the mining company that will do the work. We’re already well into the final feasibility study – that’s probably got a 12-month timeline on it. “We have appointed a chief of uranium marketing, so we’re already starting to deal with the utilities on an initial phase to understand their requirements going forward. Moreover, we anticipate looking to secure project financing by the end of next year – with two years for construction.
GoviEx’s ability to position itself as well as it is, has come in part from the company’s decision to set up its projects in Africa. Madaouela took six months to permit. A comparable project in countries like Canada, the US, or Australia would likely take closer to six years.
“Africa has substantial uranium resources across it, and governments there are predominantly resource driven and have very solid mining codes and permitting rules.
“Since 2009, we have operated with a 100% local employment strategy, so everybody in the Niger operation is Nigerien. The same is true with our operations in Zambia and Mali. That’s the benefit of picking countries in Africa that have existing mining cultures.”
“Niger has been producing uranium since the early 1970s and Zambia has been renowned for its copper industry for decades. Mali has gone from being nowhere in gold to now the 4th largest gold producing nation in Africa,” he said.

‘We’ve already got over 20 years of production in existing resources, so the ability to expand that is very easy’
– DANIEL MAJOR
CEO

On the backburner, while GoviEx focuses on the Nigerien and Zambian operations, the multi-commodity Mali project also offers significant value to the company.
Major has extensive experience to draw upon in navigating GoviEx’s African projects into successful businesses. With over 30 years in the mining industry, he worked with Rio Tinto at the Namibian Rossing Uranium Mine and South African Amplats – and has also worked as a mining analyst with HSBC and JP Morgan, in London.
Bolstering his own experience is GoviEx’s executive chairman, Govind Friedland, a geological engineer.
“We get the pedigree that comes with having Govind as a founder and the real benefits and ability to synergise with the whole Ivanhoe Group – as our much bigger brother. These are real advantages for us.
“We’ve also have Benoit La Salle, as a director, who was the founder of SEMAFO and basically opened up West Africa for gold mining.
“We’re a practical group. We get on and do the job that needs to be done. We’ve built our company up steadily. And we’ve got a really good board of directors,” Major said.